How did The Book Fairies celebrate International Women’s Day?

Book Fairies around the world celebrated International Women’s Day by hiding copies of Our Shared Shelf books – and there are still more to find on the 9th!

Emma Watson is a Book Fairy for the day

We must admit, we had an extra pair of hands on the day – Emma Watson hid books around places of significance to women and the feminist movement. Did you spot one? 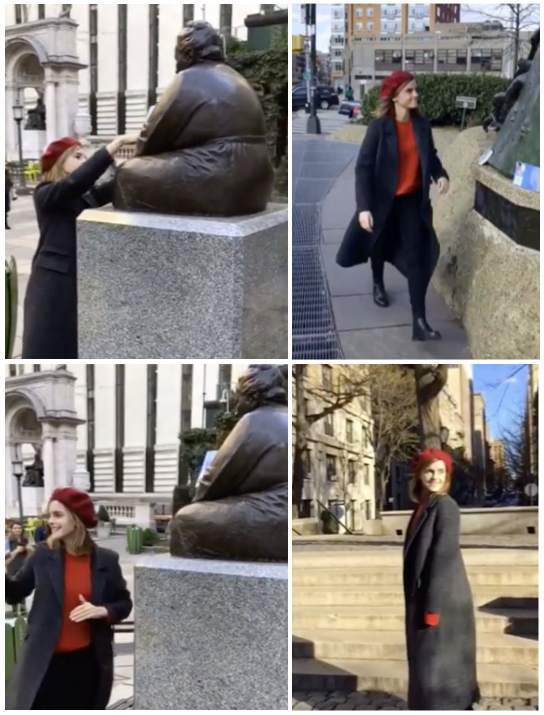 The Gertrude Stein statue: Gertrude Stein was an American novelist, poet, playwright and art collector. She was a leading figure in modernism in literature and art in the early 20th century. She wrote Tender Buttons and Three Lives, as well as work dealing with homosexual themes.

The Joan of Arc statue: The statue of French patriot and saint Joan of Arc was sculpted by a woman, Anna Vaughn Hyatt Huntington, in 1915. It was the very first statue depicting a non-fictional woman in NYC and was the only one until the 1980s.

Harriet Tubman memorial: Harriet Tubman was an American abolitionist and humanitarian. Born into slavery in 1822, she escaped and subsequently rescued around seventy enslaved families and friends. After the American civil war she became an active participant in the struggle for women’s suffrage.

Harriet Truman statue: Eleanor Roosevelt was the longest-serving First Lady in US history and she later served as the US delegate to the United Nations. She was the first chair of the UN Commission on Human Rights and also oversaw the drafting of the Universal Declaration of Human Rights.

You can see all her videos and pictures on Emma’s instagram.

My Life on the Road by Gloria Steinem

The Color Purple by Alice Walker

How to be a Woman by Caitlin Moran

Mom & Me & Mom by Maya Angelou

Half the Sky by Sheryl WuDunn and Nicholas Kristof