We asked our book fairy Renata, who lives in Germany, to tell us all about the reading culture there.

Reading culture in Germany is quite advanced. You can see a lot of people reading, while commuting, hanging out in parks, or sitting in cafes. Based on my observations, Germans prefer to read actual paper books instead of using E-readers. There are a lot of bookstores around Berlin with vast varieties of books. Everyone can find something to satisfy their taste. There are a lot of specialized bookstores, scattered around Berlin, some are dedicated to art, others sell comic books; while some offer books in French or Italian only.

Historically, Germany has been called the country of poets and thinkers (Das Land der Dichter und Denker). You don’t have to go back to Goethe and Schiller in order to find influential German writers. The 20th century saw the works of Thomas Mann (Buddenbrooks), Hermann Hesse (Siddhartha) , and Günter Grass (The Tin Drum) who all won the Nobel Prize in Literature. Other German speaking authors of that century include Franz Kafka (Metamorphosis), Michael Ende (The Neverending Story), and Max Frisch (Homo faber). Nowadays, Herta Müller (The Hunger Angel, Nobel Prize in Literate), Juli Zeh (Unterleuten), and Berhard Schlink (The Reader) are among many others considered to be important contemporary German authors.

Why Renata is looking forward to being a book fairy 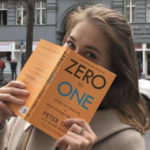 “Books have the power to change people’s lives for the better. It is always sad for me to realize that not everyone has access to that power. That is exactly what makes me excited about being the first #bookfairy in Berlin. Let’s be nerdy! Let’s read, learn, and change our world for the better!”