Our book fairy in Norway, Andrea, has written a piece about the reading culture there, so we can learn about the attitudes to reading around the world!

About the Norwegian reading culture

Reading, as I have observed, has been part of the daily lives of the people living here in Norway especially the locals. I see a lot of them holding a book while walking, some are reading on the bus or train or any other means of public transportation and some people you´ll see reading inside cafes. I believe literature itself contributed to the history of Norway. An example of this is the “De Fire Store” (The Four Greats) which is a group of norwegian novelists/poets who made a huge impact in the society. They all made astounding works in writing, poetry and even theatrical plays. The famous one by Henrik Ibsen is a play called “Et Dukkehjem” (A Doll´s House) which had a significant influence on the feminist movement and contributed to the gender equality here in Norway. In fact, Norway is one of the most gender equal countries in the world.

Literature continues to become a huge part of their culture. Not only do they read foreign (english) books but mostly they read books written by local authors. Most of them are fond of reading crime fiction.

It’s amazing that one may find a public library built in each city / town / community. Anyone can borrow books, audiobooks, CDs or DVDs when you sign-up for a library card, which is absolutely free! These public libraries called Bibliotek doesn’t only cater books but also have scheduled programs such as film viewing and even language cafe (basically for people who speaks little norwegian and wants to be better at it). Furthermore, Litteraturhuset (The House of Literature),being the largest literature institution, is also a go-to place for people who wants to read. Inside it is a cafe, a restaurant and a bookshop, all in one place! It´s often crowded because a lot of people go there to read and eat and the good thing about it is, it´s open until midnight and also during weekends. Literature festivals are also being held in different parts of Norway every year. For example, the Oslo Book Festival held during autumn in Oslo and Literature Festival held annually in Lillehammer and Stavanger. Aside from festivals, one of the most important events is the annual literary awards. Just to name a few are Brageprisen, Herman Wildenveys Poesipris, Norwegian Bookseller´s Prize and Det Norske Akademi for Litteratur og Ytringsfrihet.

Reading is certainly not uncommon here in Norway. Locals read everywhere and they read a lot. In my opinion, Norway is a home of book lovers like us 🙂

Why is Andrea looking forward to being a book fairy? 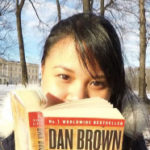 “Books not just supplement the mind and widen our imagination but also touch our hearts and give a huge impact in our lives. I am extremely excited and honored to become the first book fairy in Norway! Hopefully, I can share my wonderful reading experience to others and make a difference by being a book fairy ❤❤❤”