We asked some of our international book fairies to write a piece about the reading culture where they live. This post comes from Diana, who lives in Barcelona, Spain.

Barcelona is a creative city, full of museums, libraries, creative networks and enterprising people. It is the centre of big and small publishing groups. Barcelona is part of the Network of Creative Cities and became the seventeenth UNESCO City of Literature in December 2015.

April 23 is World Book Day and in Catalonia the Diada de Sant Jordi is also celebrated, a tradition in which all booksellers and florists fill the boulevard with books and roses. It is tradition on this day to give a book and a rose as a symbol of culture and love; this day is also important because it is a representation of Catalan culture and language.

Why did Diana become a book fairy? 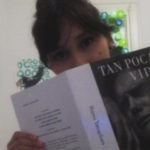 When asked why she joined The Book Fairies, Diana said:

“I’m over the moon at being the first Book Fairy in Spain because I believe in the happiness of giving and receiving. Is wonderful being a connection between the world we live in and the imaginary world writers create. The universe is infinite and books have no limits!”