One of our book fairies in Alberta, Canada, has taken the time to review Dead Woman Walking by Sharon Bolton before hiding it in her hometown for someone else to find and enjoy! Here is Sandy with her review.

The plot of Dead Woman Walking

Jessica Lane has always depended on her big sister Bella. A childhood riddled with tragedy made them even closer until they went their separate ways. Jess was sent to live with an aunt & uncle & Bella became a nun.

Now Bella is turning 40 & Jess has the perfect gift….a view of the world beyond the abbey’s walls from a hot air balloon. What could go wrong? Oh man, where to begin…. 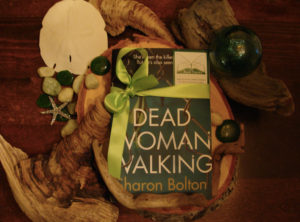 If you’re a fan of the author, you know she is famous for sneaky knock-out punches you never saw coming. Half the fun is trying to figure it out before she drops you to your knees so I don’t want to give too much away. Suffice to say while Jess, Bella & 11 others are soaring over the Northumberland countryside, they see a nasty crime in progress. Jess is shocked to realize the man looks familiar. And he’s staring right at her. The last thing he needs are witnesses & by the time the dust settles, the balloon has crashed killing everyone on board. But as he picks through the bodies he only counts 12. Wait…where’s the young woman he locked eyes with?

Well, turns out the lone survivor is up a tree. When she comes to, all she knows for sure is she has to run. It’s the beginning of a deadly game of cat & mouse along the Scottish border that grows increasingly complicated once the police are involved.

What I thought of the book

The overall plot is extremely complex & there are many side stories that flesh out a large cast of characters. Two time lines run simultaneously. In alternate chapters we go back & follow Jess & Bella as they grow up. We know something terrible happened when they were young & pivotal moments are gradually revealed & woven into present day events.

Yeesh…could I be any more vague? It’s one of those books where the less you know going in, the better & I’m getting dangerously close to spoiler territory.

The story moves along at a good pace thanks to short punchy chapters told from multiple POV’s. But to be honest, I had trouble connecting with the MC’s for the first half. It’s obvious that a lot of information is being withheld & only slowly doled out as the book progresses. Because of that, I had a hard time understanding some of the characters’ actions & motivations & it prevented me from being completely invested. At about 45% a couple of big pieces fell into place, the lights went on & from that point I was all in. All of a sudden I understood some of our heroine’s dodgy decisions & it became a true page turner.

At the very end there is a twist that seems a little too neat but it’s a minor quibble after a couple of classic Bolton bombshells that will have your jaw heading south. The characters are very diverse & I particularly enjoyed Sister Belinda, an elderly nun who has watched waaay too much CSI.

The end is satisfying & evokes a range of emotions as the characters (and readers) finally get their answers. It’s not my favourite book by Ms. Bolton but she sets the bar so high, I highly recommend it to anyone looking for a smart, intricate thriller that will mess with your head.

Thank you Sandy for sharing your thoughts on the book! Did this review make you want to read it? Or have you read it and have your own thoughts? Comment below to join the book fairy discussion!

If you’d like to become a book fairy then head to our book fairy goodies page to grab some stickers!