We absolutely LOVE to hear from book fairies across the world about their adventures as a book fairy! One of our English Book Fairies shared her story about her incredible book fairy road trip across the united states: Eleven books and a sense of adventure! We hope you enjoy reading this story!

I have just returned from an incredible road trip around America from New Orleans up to Boston in the space of seventeen days! The catalyst for the road trip was that a few months ago my husband and I were watching a documentary about Harper Lee showing Monroeville, Alabama where To Kill A Mockingbird was set, so naturally I decided to plan a road trip to include it-A normal response to watching a documentary!

I decided to do a literary tour of the USA and began researching authors, book settings and routes. After seeing Emma Watson on Instagram being a book fairy in Paris, I thought what an opportunity for me to take it a step further and do a Book Fairy Road Trip! We chose places to go to and I researched books from that area and then picked out a spot relevant to the book where I would leave them. The relevance of specific location was important to me as reading the books in the location they are set, in my opinion, gives a deeper understanding of both the book and the place. So green ribbons, stickers, a tote bag and eleven second hand books were purchased and personally messaged “From An English Book Fairy”. Honestly, I think my husband thought I was a tad crazy lugging eleven books around America with us but I managed to rationalize it by saying that as they were left we would have suitcase space for gifts to bring home! 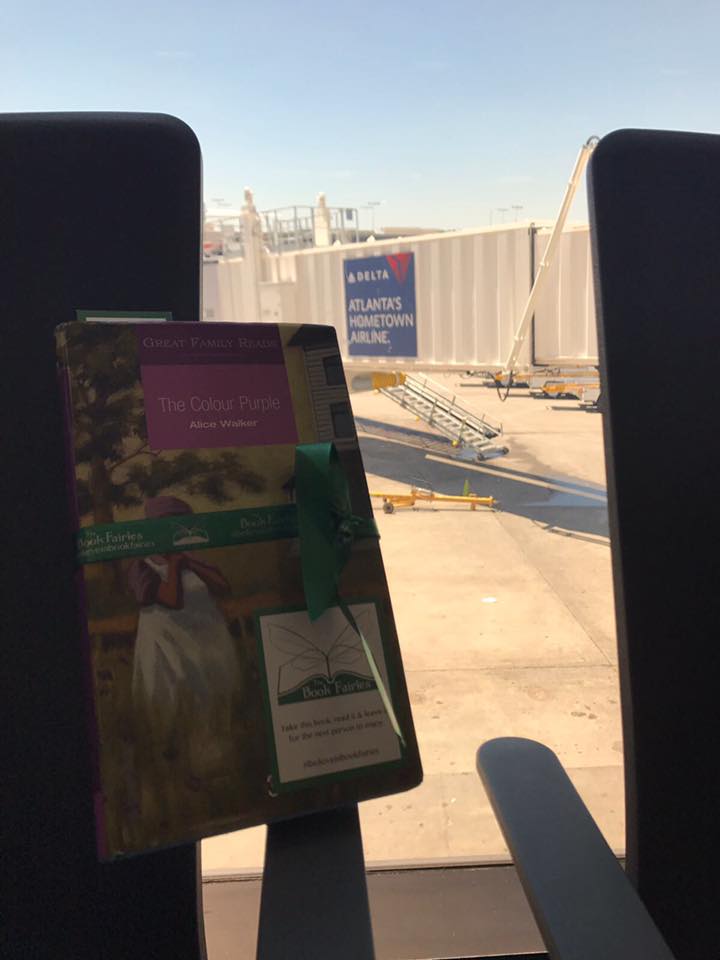 The first book, ‘The Color Purple’ is such an important book about society in America and women’s rights that I couldn’t not include it. Unfortunately we didn’t leave the airport in Atlanta, Georgia so it was left at the gate for some lucky traveller to read on their plane journey. 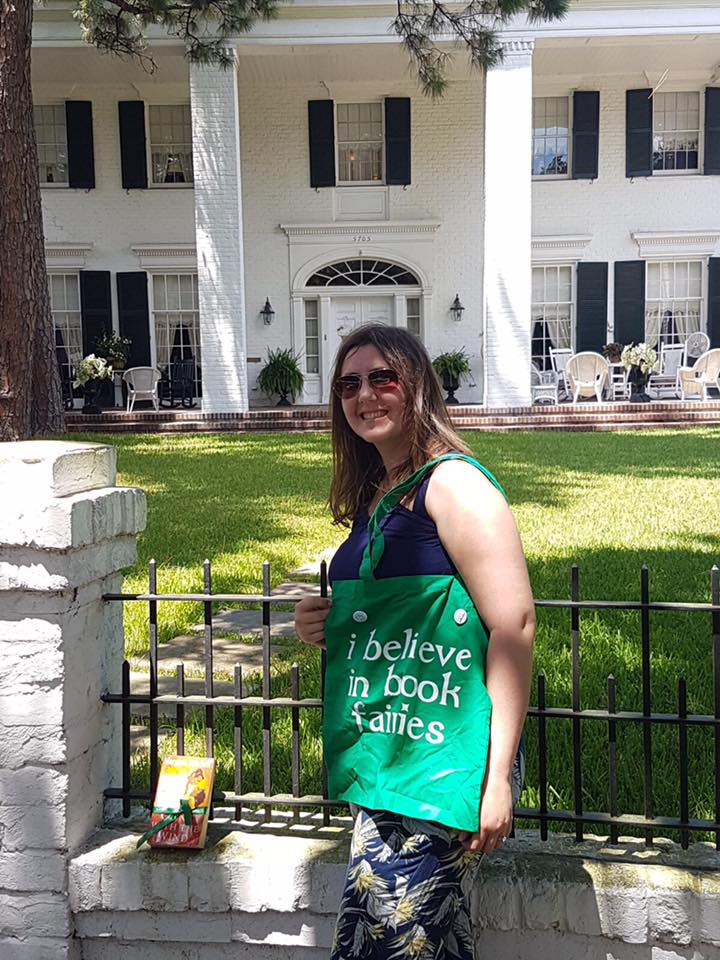 The road trip officially started in the buzzing New Orleans, the jazz capital, with its Frenchman Street and Preservation Hall. This was tricky for finding a book but then I heard about a house in New Orleans where the owner loved ‘Gone With The Wind’ so much that her husband turned their house into a replica of Tara. I had my answer. I also knew that Rhett and Scarlett went there on honeymoon so it seemed like a perfect place to leave this classic novel which gave a deeper understanding about plantations and the American Civil War, dovetailing well with the bicycle tour we did whilst there. 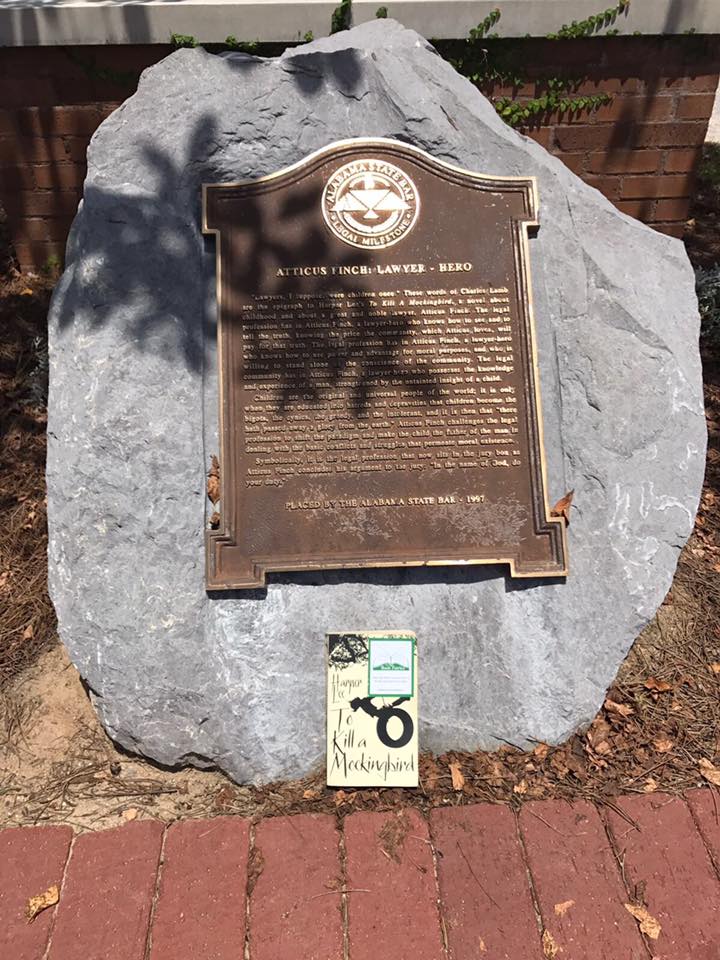 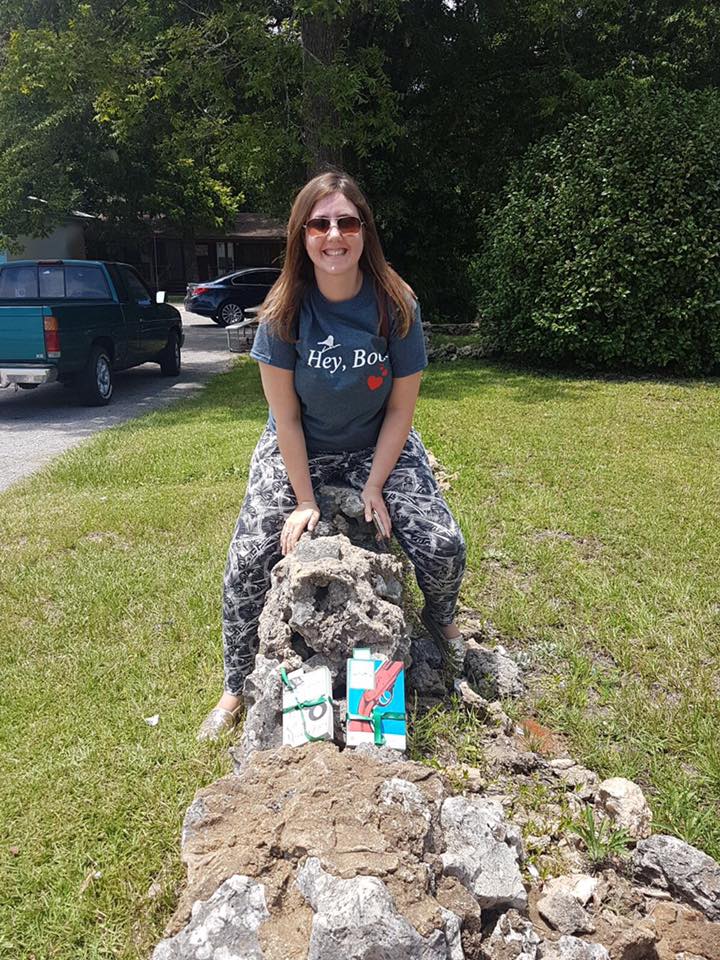 We then drove across Mississippi to Alabama to learn about The Civil Rights Movement. I can not think of a more perfect introduction, than Monroeville. We started at the Court House where Harper Lee’s father, the real life inspiration for Atticus Finch, practised law. We saw the court house and exhibitions about both Lee and Capote, Lee’s next door neighbour and supposed inspiration for Dill. The set for the film was a copy of the court. In the spring they host a play of the book with the first act performed in the gardens and the second half in the court room itself. Outside there was a bench with a memorial to Atticus Finch where I left a copy of the book. A short stroll down the road, past ‘To Kill A Mockingbird’ murals and birdhouses, we came to a wall which was the divide between where Lee and Capote’s homes used to be. I left a book by each of them either side of the wall.

We then worked our way up through Alabama to Selma (Edmund Pettus Bridge, Civil Rights Museums), Montgomery (Martin Luther King Jr’s house-the highlight of our entire road trip, guided by the awe inspiring teacher Dr Cherry and meeting the incredible Ms Vera Harris. Also the Rosa Parks Museum and the Freedom Riders Museum) finishing in Birmingham (Civil Rights Museum and 16th Street Baptist Church) learning about The Civil Rights Movement. We were surprised to see no less than five confederate flags in this state post Martin Luther King Jr and ‘To Kill A Mockingbird’ showing that there are still tensions today. 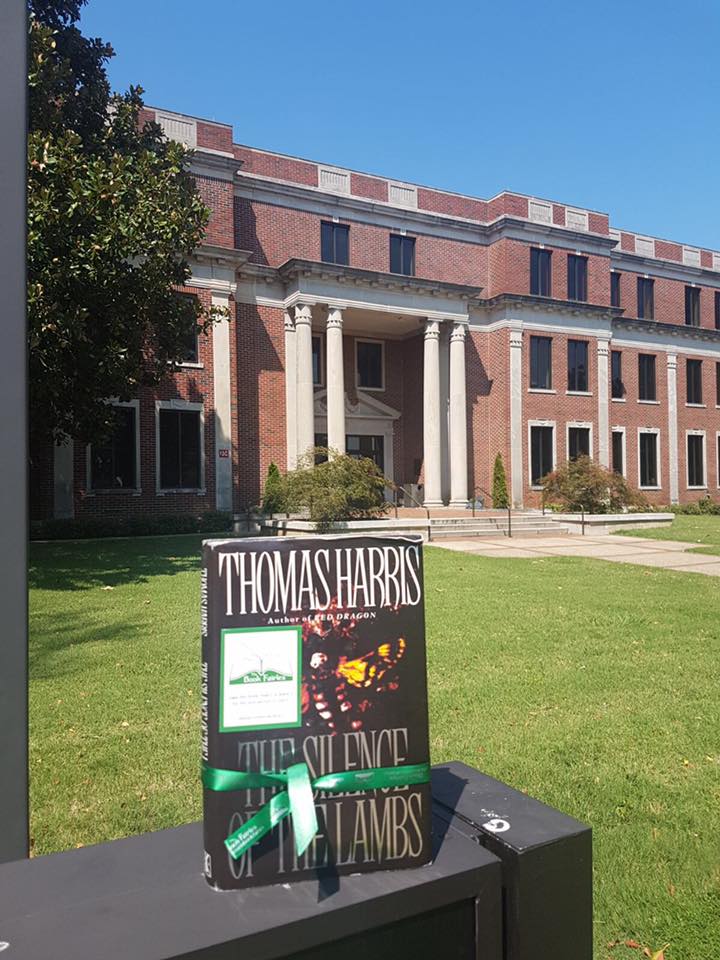 The next stop was Memphis, Tennessee, home of Elvis, Sun Studios, Gospel, the Blues, and the Lorraine Motel where MLK Jr was shot. I admit that I cheated somewhat by leaving ‘The Silence of the Lambs’ which I have not yet read-one to add to my reading bucket list. We drove to Shelby County Courthouse where he was imprisoned to leave it there but in our haste we mixed up the buildings and left it outside the juvenile court rather than the intended county court on the same road. I hope it isn’t picked up by an inmate who reads about how Hannibal Lecter escapes from his cell by brutally killing his guards! 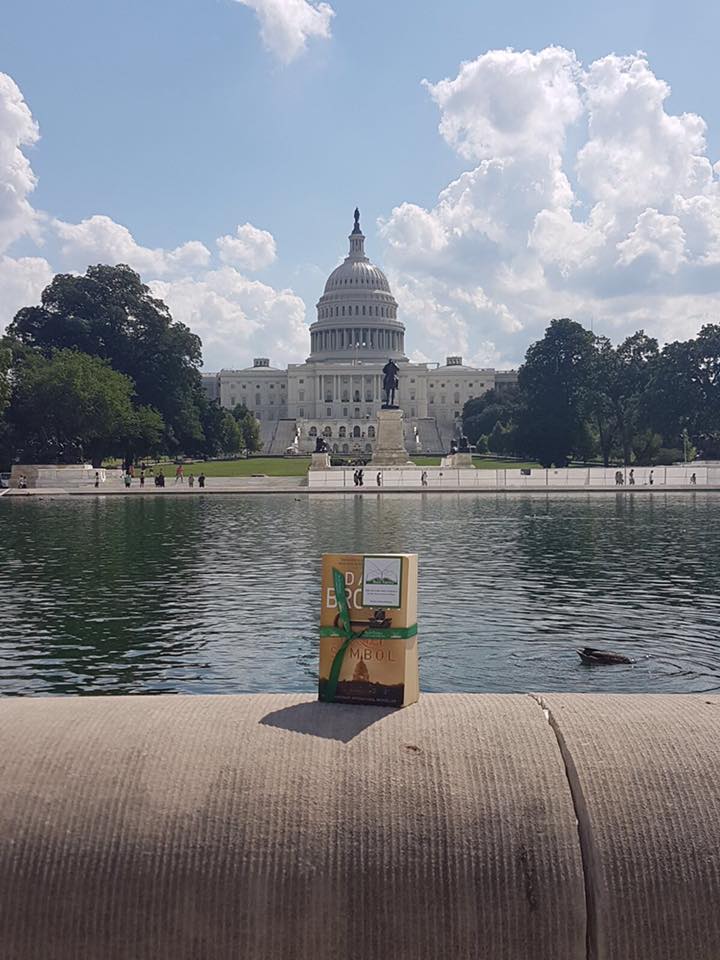 We travelled across Tennessee and spent some time in Nashville and the Smokey Mountains before flying to our next Book Fairy stop on our Roadtrip, Washington DC. For DC I chose Dan Brown’s The Lost symbol which was a perfect setting for symbologist Robert Langdon with its Smithsonian Museums, Memorials and proximity to the White House. The opening scenes are set at the Capitol and, without wanting to give too much away, involve a severed hand there. The Capitol and its reflecting pool was on the book cover and subsequently the location I chose to ‘book fairy’ it! Book Fairy is now a verb! 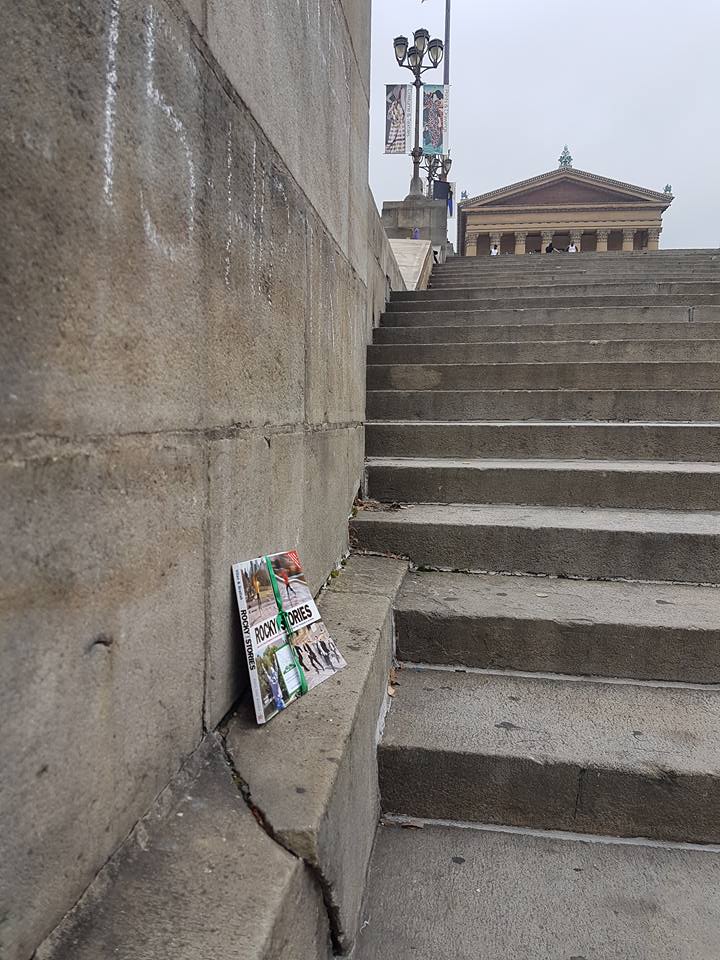 Book number eight of the road trip was called, ‘Rocky Stories: Tales of Love, Hope and Happiness at America’s Most Famous Steps’. Which is about the people who run the ‘Rocky Steps’ and the inspirations for doing that. There was no better place to leave this than at the bottom of the Rocky Steps to inspire others to reach the top and see the view down Benjamin Franklin Parkway. 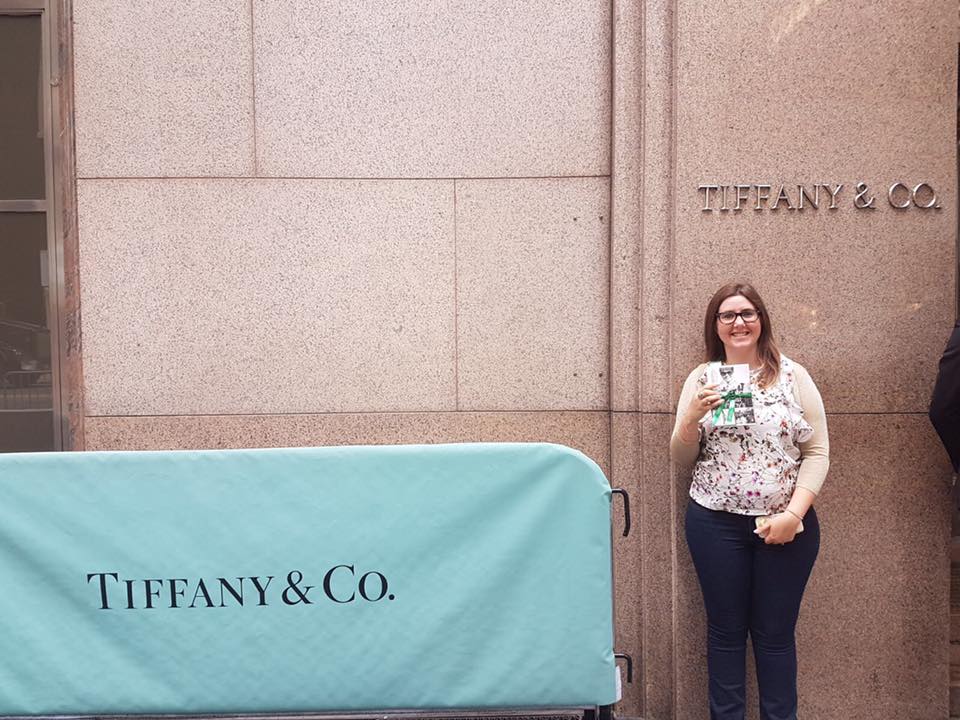 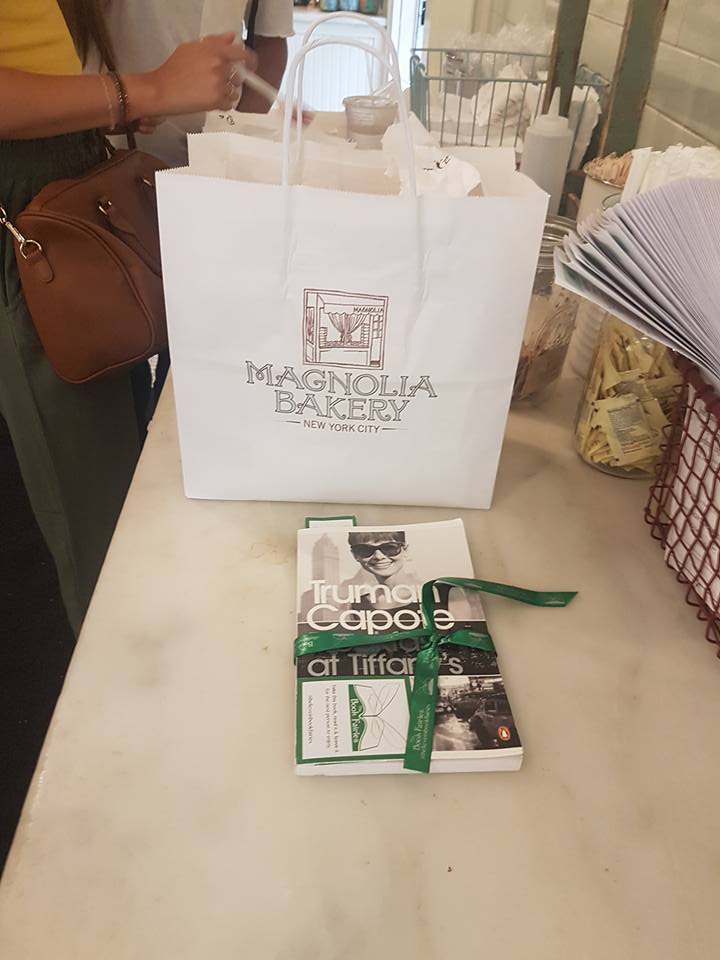 Next Stop, NYC! For New York I chose the Capote classic, ‘Breakfast at Tiffany’s’ and you’ve guessed it, I left it outside the famous Tiffany store on Fifth Avenue, or so I intended! President Trump was a block away at Trump Tower so the block was closed off to the public. Tiffany was still accessible on one side. However there were at least twenty security guards and police on each corner that I was concerned I would be arrested for leaving a potentially suspect package-rebel book fairy unfortunately I was not! So I took a photo with the book by the Tiffany entrance and instead used my back up plan. Holly Golightly has her breakfast of a pastry and coffee whilst gazing in the store window so I decided to leave the book at my favourite New York Bakery, Magnolia on 6th in homage to that. 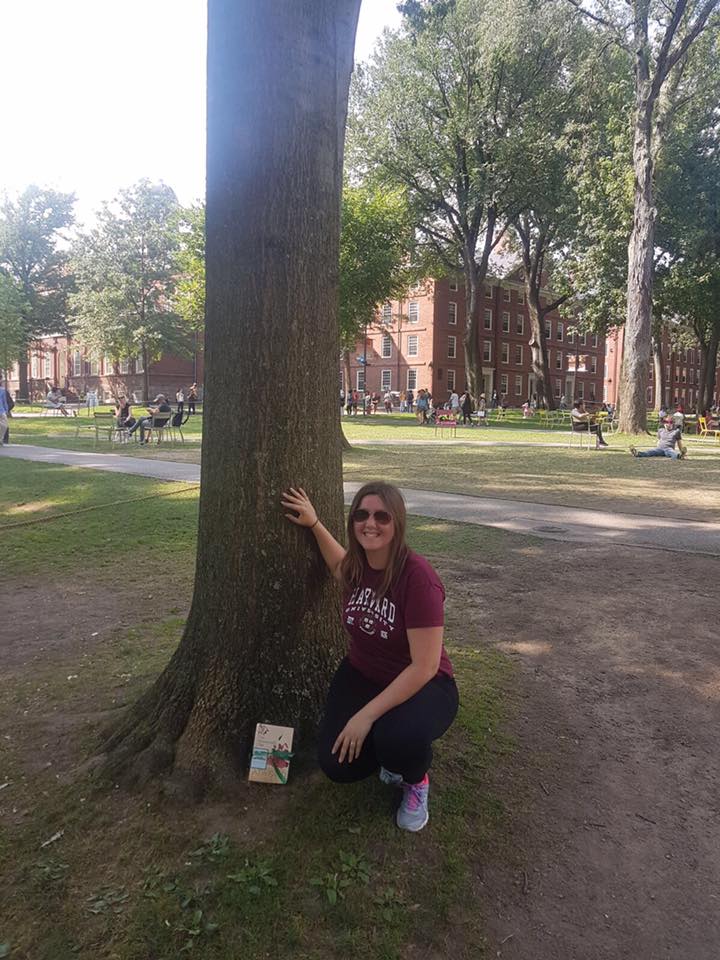 Books ten and eleven were both deposited in Boston. The first was the feminist reading ‘The Handmaid’s Tale’ which I read for my A Level English and religiously watched the screen adaptation recently with Elisabeth Moss as Offred. Gilead is based on the Harvard area in Cambridge, Massachusetts which Atwood has stated was due to puritans presence there and intolerance. Whilst doing a 13 mile bike tour through Cambridge, I decided to leave it in a perfect reading spot, under a tree in Harvard Yard. 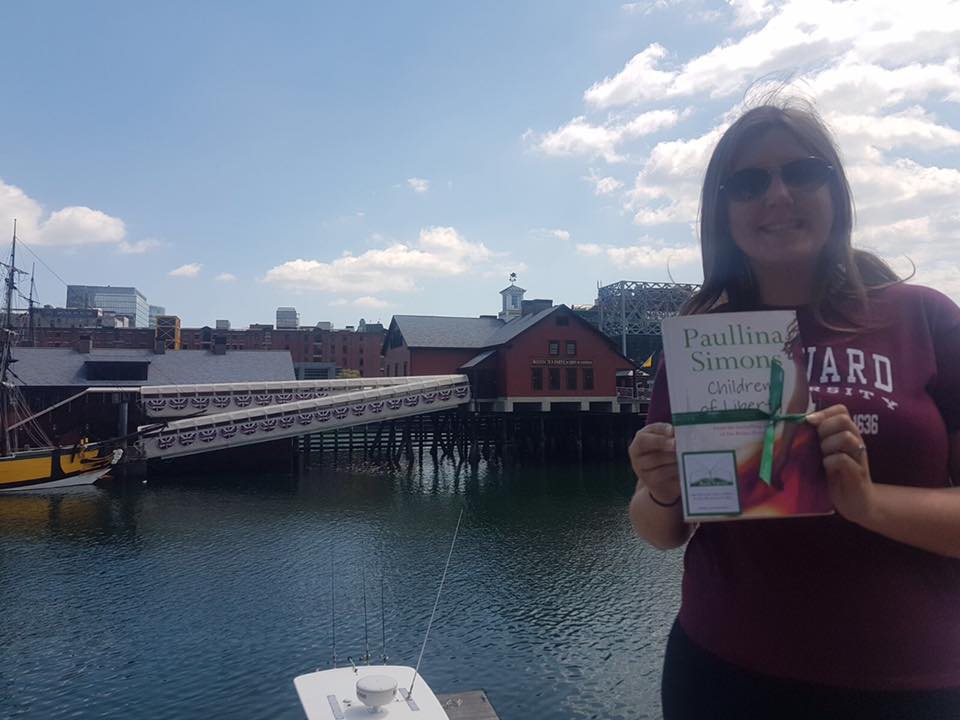 The final book of the road trip was ‘Children of Liberty’ by Paullina Simons. The original trilogy is ‘The Bronze Horseman’ which is in my top three books of all time, along with Pullman’s, ‘Northern Lights’ Series and Lee’s, ‘To Kill A Mockingbird’. Simon’s original trilogy, set primarily in St Petersburg, Russia, is the love story of Tatiana and Alexander and tells of Russia’s history at the outbreak of WW2 from the perspective of a young girl. Highly recommend! I enjoyed recently visiting there and have a much better understanding of many of the places visited through the eyes of Simon’s characters. I admittedly but not regretfully, dragged my husband for an hours walk in the cold February snow to find the bus stop where the two characters met, to find creme brûlée ice cream as per their first meeting, Sadko, the Winter Palace, the Field of Mars, the Summer Garden and of course the statue of the Bronze Horseman itself. It was tricky to find the bus stop as road names kept changing along with the city’s name piecemeal but a tour guide helped me out! ‘Children of Liberty’ is part of a pre trilogy to ‘The Bronze Horseman’ and is the story of Alexander’s parents life in Boston before moving to Russia. His mother Gina was an Italian immigrant whose family had a restaurant in the North End and who came into the USA via the Boston Harbor, the location of my final Book Fairy drop off for this trip.

I hope that this feature inspires others to be book fairies and has perhaps given you some ideas for books for your own reading ‘booket’ list. I seriously recommend book fairying for your holiday with a book about the place as it adds so much to your trip and perhaps you will be as crazy as me and do a book fairy roadtrip of your own or a series of books in one place you visit. Emma Watson, I challenge you!

Would you like to join in the Book Fairy Fun?

Head down to our shop and get your stickers!