The week of September 24th, Book Fairies all over the world celebrated Banned Books Awareness Week by hiding recent and classic banned and challenged books! We are excited to share some of the stories and experiences of our official book fairies! 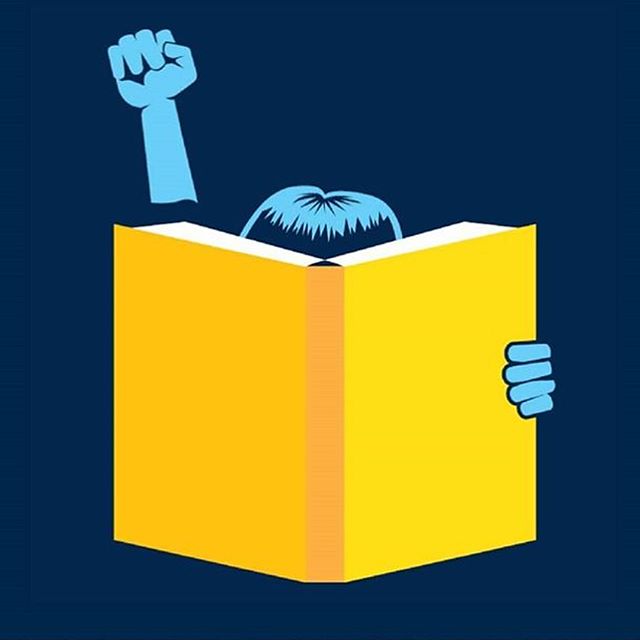 Our Official Singapore Book Fairy let the vampires loose in the Bras Basah Complex. Our fairy loves this building with its many book stores and art supply shops…. always a dangerous trip, even without them blood suckers!

Twilight is a series of four vampire-themed fantasy romance novels by American author StephAnie Meyer. Bella moves to Forks and falls in love with Edward, who hasn’t heard about them?! The books have been made into films and won awards. But are banned from school libraries in some countries too. 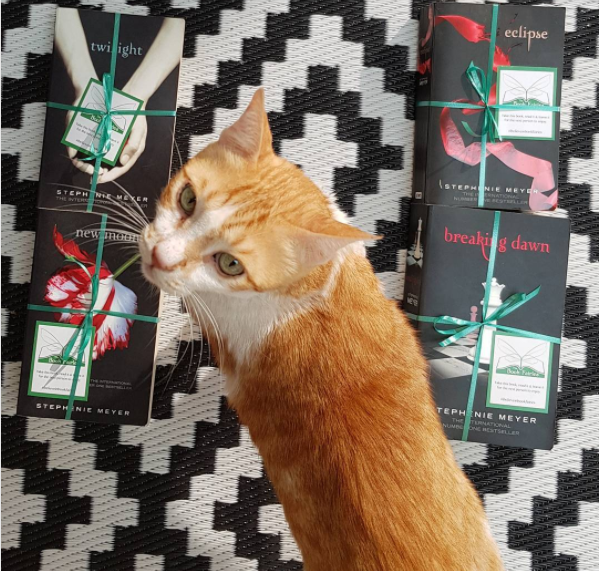 Another one for Banned Books Week was Nineteen Eighty Four by George Orwell. This one is waiting by some of the prettiest flowers in kings park, Australia!

Why it was banned:

Banned by the Soviet Union in 1950, as Stalin understood that it was a satire based on his leadership. It was nearly banned by US and UK in the early 1960s during the Cuban Missile Crisis. It was not until 1990 that the Soviet Union legalised the book and it was re-released after editing

Hidden away in the Record Department of the sprawling Ministry of Truth, Winston Smith skilfully rewrites the past to suit the needs of the Party. Yet he inwardly rebels against the totalitarian world he lives in, which demands absolute obedience and controls him through the all-seeing telescreens and the watchful eye of Big Brother, symbolic head of the Party. In his longing for truth and liberty, Smith begins a secret love affair with a fellow-worker Julia, but soon discovers the true price of freedom is betrayal. George Orwell’s dystopian masterpiece, Nineteen Eighty-Four is perhaps the most pervasively influential book of the twentieth century 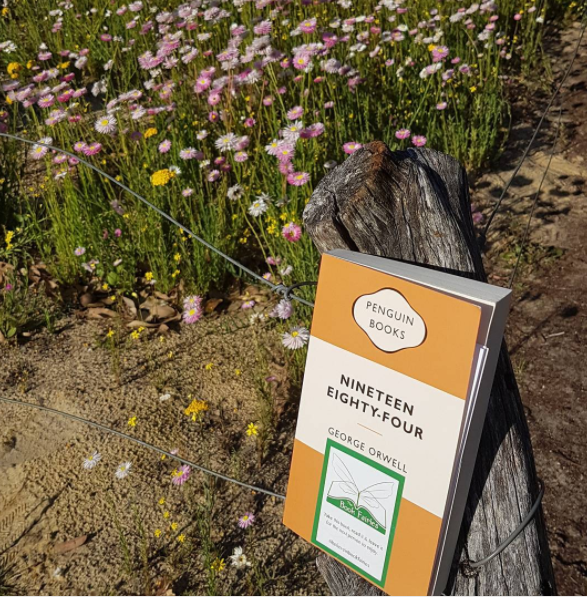 The book was later FOUND by a lucky reader!!! He expressed his excitement –

A gift from the Book Fairies I found amongst the flowers. A favourite from high school, and a topical re-read at the moment. 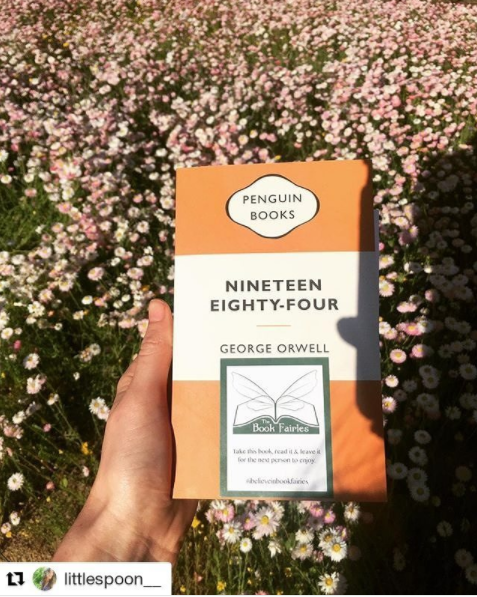 For Banned Books Week, our official Pittsburgh book fairy did a “corresponding” book drop at one of her favorite places in Pittsburgh – the Cathedral of Learning. A part of the University of Pittsburgh’s campus, the Cathedral is often referred to as Hogwarts because of its castle-like interior and beautiful stained glass windows. She chose to leave some copies of Harry Potter there, for obvious reasons, but she also left “Harry, a History” by Melissa Anelli. In the book, she discusses the history of the Harry Potter phenomenon- including its controversy in the United States. In chapter 9, called “Banned and Burned,” she describes her meeting with one book’s biggest protesters, and the long line of challenges faced by Harry and his creator, J.K. Rowling. 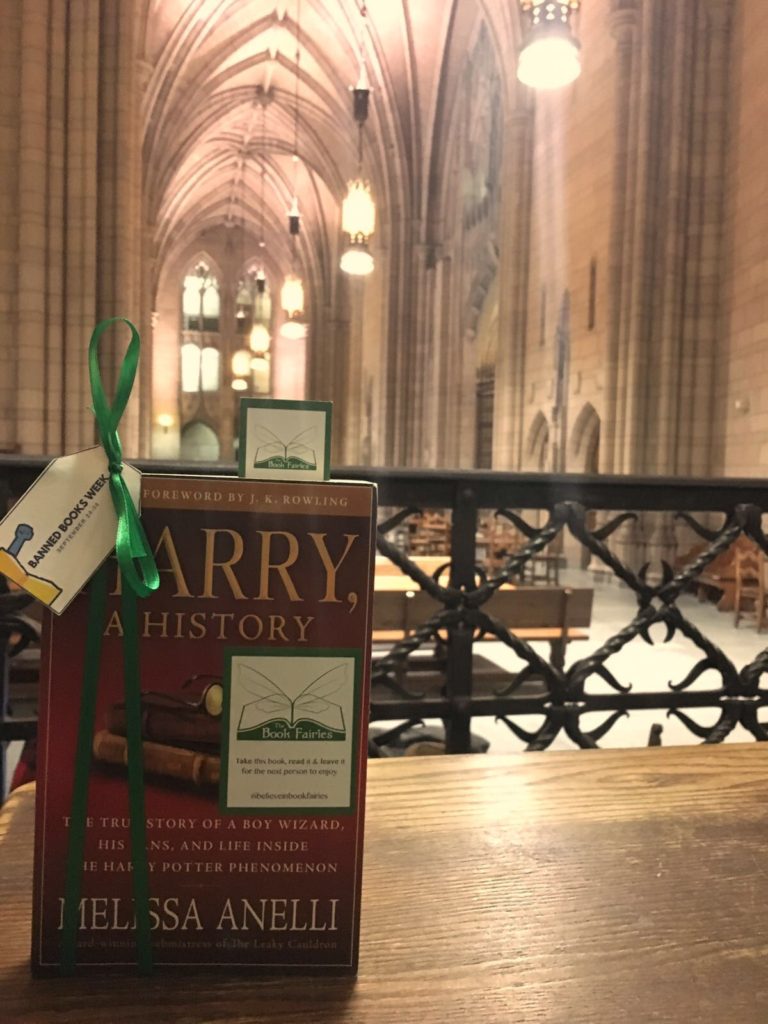 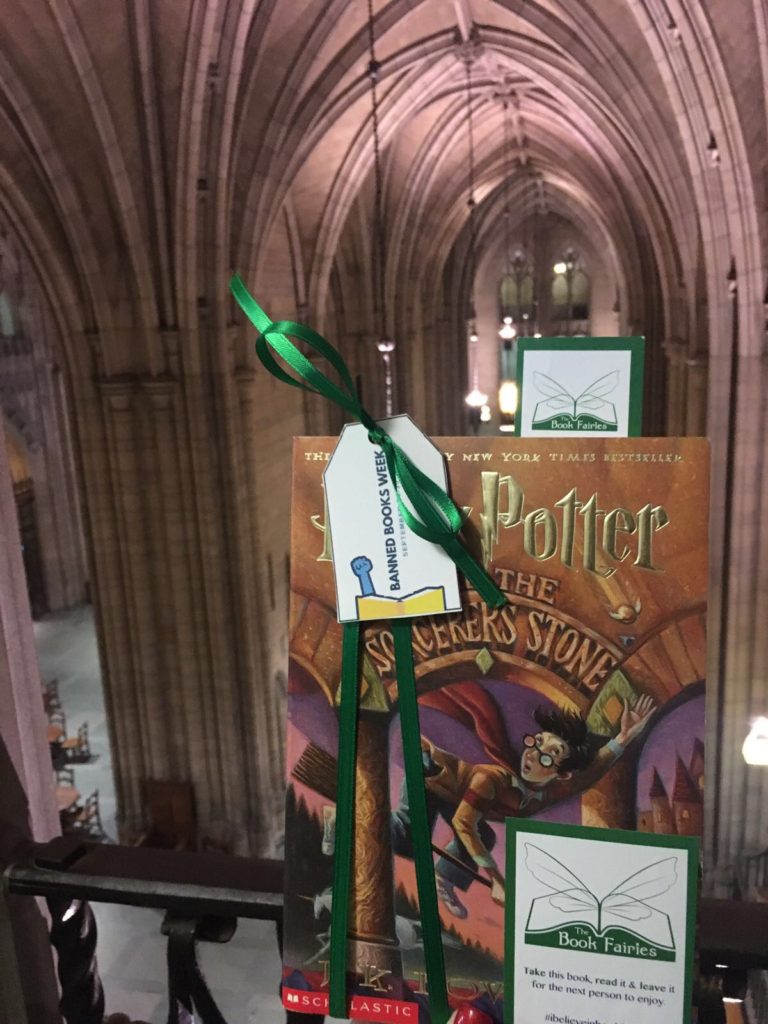 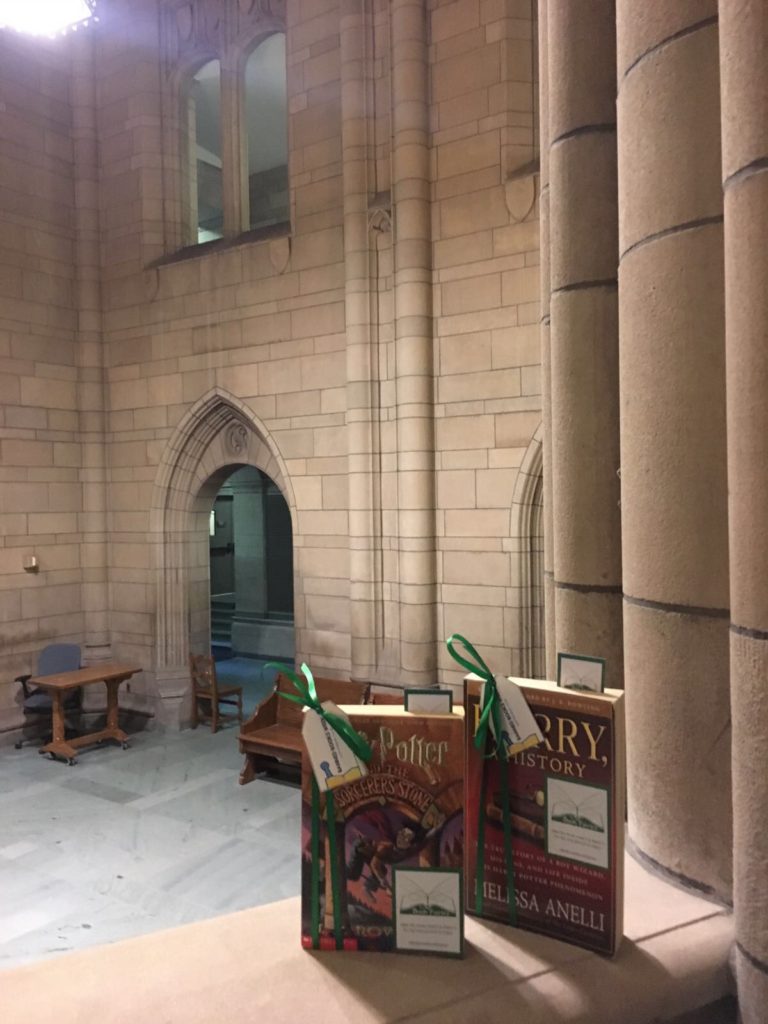 Our official book fairies in Arizona, Ohio, Kentucky, Minnesota, Texas, Indiana, Oklahoma and Washington had the opportunity to partner with Half Price Books for this special week! Each of these books lovingly provided by Half-Price Books had a $25 GIFT CARD inside!  Here’s what our Seattle book fairy had to say about her experience –

I loved hiding all banned books, but I felt a special connection with hiding Harry Potter. It reminded me of having to sneak my own copies into school and hide them behind other covers so I could read them whenever I wanted  ? 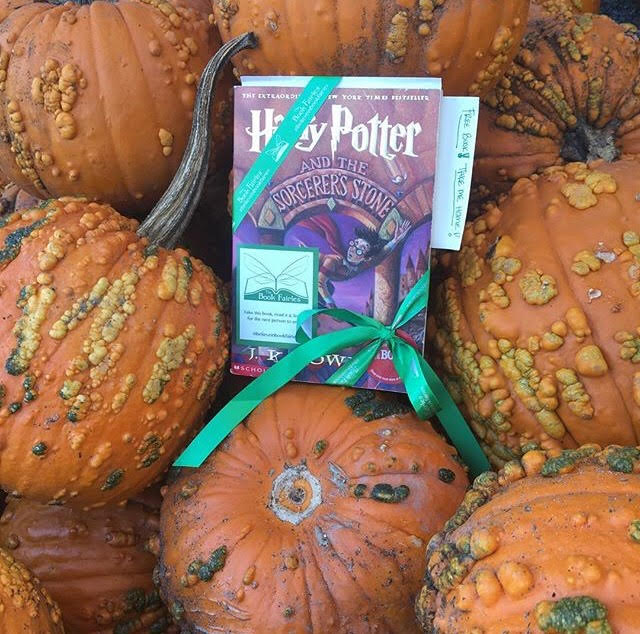 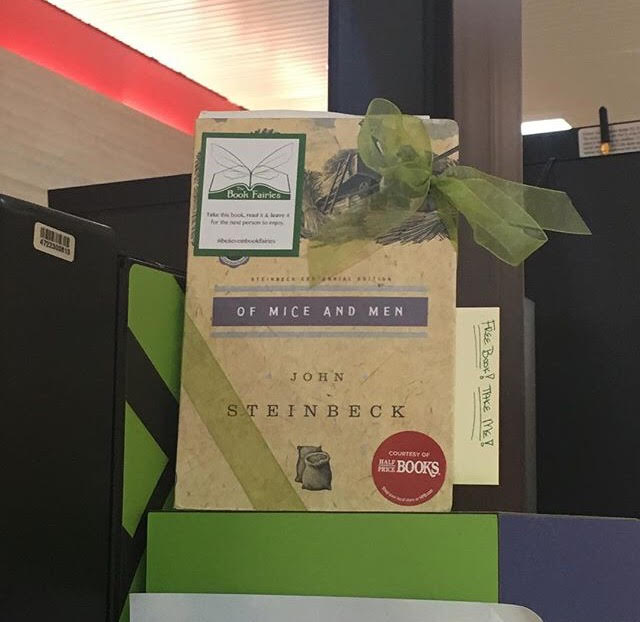 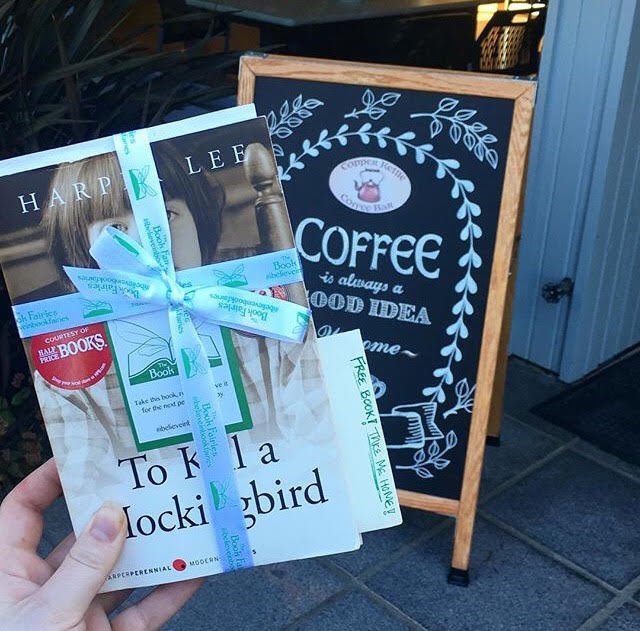 For Banned Book Week , our book fairy in Bangalore hid a mix of challenged and banned books like God of Small things, Dracula and Da Vinci Code. She shared her experience and thouhts as follows –

What I loved about the week was one the conversations that happened when I went to drop the books. Each book drop spurred quick conversations with on lookers who wanted to know what I was doing and so on. One partcular conversation I enjoyed was at this. On the way to one of my book drops, I happened to stop at a book store to see if there were other banned books I could buy. The person at the store and I soon got talking and I told them about The Book Fairies and the theme of the week. This started this whole conversation about freedom of speech and various books that were banned and we kept trying to think of the more popular books that neither of us had any idea were banned or couldn’t understand why they were banned. After about 10 minutes of talking, i bid goodbye and turned to walkout only to notice that we had inadvertently gathered a large crowed who were listening with rapt attention and said that the conversation was quite enlightening to them. This made me feel really nice and pretty awesome to be part of this group, as thanks to these campaigns I’ve learned so much about the books around me, which I wouldn’t have known otherwise. And not just that, this one time I felt that the campaign educated people as well as giving them a book to read. So yeah, I really enjoyed banned books week and the conversations it brought on.

We are excited for next year’s Banned Books Awareness Week and until then, hope to continue  hiding and reading more books EVERY DAY!

Do Want to become a book fairy?

Its simple! Head down to our shop for your own book fairy stickers and other exciting goodies!