For the month of November, The Fairy Book club is excited to start reading The Room on the Roof by Ruskin Bond!

The Fairy Book Club November theme is Young Adult novels by Indian authors. Readers and members of the book club were asked to vote from the top two book choices among all the book suggestions  – 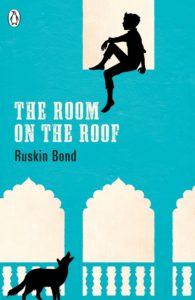 Rusty, an English kid who, having lost his parents at an early age, now lives with his guardians in the European community that borders the outskirts of Dehra (Dehradun). Mr. Harrison, his father’s cousin along with his wife have been his guardian since the demise of his parents. They have no kids of their own, but they have Rusty, who is basically ‘owned’ by Mr. Harrison as he has gradually become a slave to his guardian’s despotic command over the family through stiff rules and regulations. In some ways, Mr. Harrison resembles Maharani- the queen of bazaar cows, persistent and intolerant. There is barely any meaning in between the relationships of this fated sort of family- no hearty exchanges, no emotional connect or any other occurrence of sweet family moments.

Such being the situation at home, Rusty has learned to cope by escaping into his minds imagination and fantasies. This way he is doing well in his own world until one rainy day, while walking home, he is noticed by a local cyclist. The cyclist is interested in this uncommon sight of a European kid(Rusty) walking alone in the streets of Dehra. That guy on the cycle is the friendly and jovial Somi, a Sikh kid, who within a couple of encounters becomes Rusty’s first and ‘best favourite’ friend in Dehra. Somi becomes the starting point of this new unexpected life that awaits Rusty. He leads Rusty into this unexplored world of India and it’s culture, something which Rusty has only wondered in his daydreams.

Where can I buy the book?

The Book Fairies like to support libraries, used book stores and independent bookshops. So we would encourage looking for  a copy at your local bookstore!

Head down to The Fairy Book Club and read along with us!

How to become a book fairy?

Its simple! Get your own book fairy stickers and other goodies from our shop!