It’s another great story to celebrate the first birthday of The Book Fairies! Here is Jade’s story about becoming a book fairy and spreading her love of reading around New Zealand.

The story of Jade in New Zealand

That moment that inspires you to change the world isn’t actually as grand as they make it out to be in movies. For me, it was simple. My four-year- old asked me to look for “fairy” videos on YouTube for her. After watching several videos, she fell asleep and just as I was about to turn off the tablet, I see a video of Emma Watson dropping books on the London Underground. That was it. She was a book fairy. I wanted to be one, too! 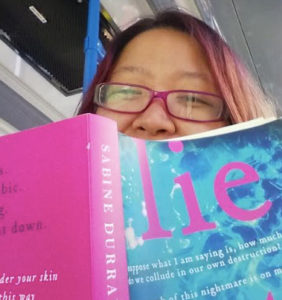 I got in contact with our Chief Book Fairy Cordelia on December 2016 to find out more about the movement. She said that something big was brewing and that I should watch out for an email in the next few months. On the 8th of March 2017, I became the first official Book Fairy in New Zealand!

When we launched The Book Fairies worldwide on that day, there were only 26 of us in different countries. It was so amazing that each book fairy got about 25 books with 5 to 6 titles from Our Shared Shelf book club. We even had handwritten notes from Emma Watson for each book.

Everything was top secret up until the first announcement. The Book Fairies around the world were to do the first drop at the stroke of midnight in London on International Women’s Day. As you can imagine, it was the most stressful, satisfying, fun thing that could happen to anyone. It was 6pm in New Zealand when the book drops were done around the world. While some had to wait until the next morning, I was on the edge of my seat counting down the seconds until the first one was ready to go.

it was just the beginning 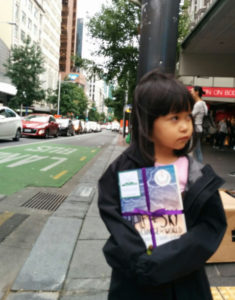 I can’t even begin to tell you what it felt like to be among the first people to do this in this part of the world. People reacted differently to each book that was left that day — a lot of people smiled, some shrieked with delight at finding a book, some ignored the books, others were totally confused. There was one that was very special to me and I remember it even a year later. A guy picked up a book I left under the fairy lights along Britomart — and he replaced it with a gift in a paper bag with a ribbon on it! I was so tempted to take it, but I wanted this to be the beginning of a chain of good deeds so I just let it sit there until someone else found it.

It’s been a year since that day and all my Book Fairy memories have been the happiest I can remember for the last 12 months. While most of my book drops have been concentrated in Auckland, I’ve gone far and wide in New Zealand going to Wellington, Napier, Matamata, Hamilton, Matakana, Goat Island, Muriwai, Coromandel, Rotorua and more. Othern book fairies have also been involved in spreading the love for books across both North and South Island in New Zealand. We’ve also worked with different themes, such as book drops for biographies, scary books for Halloween, children’s books, books for and by women for International Women’s Day and wrapped books for Christmas.

On a personal note, being a Book Fairy means so much more to me than just leaving books everywhere. It has truly been life-changing. On a daily basis, I get to speak with many book fairies across the globe — not just about books, but about everything under the sun. They’ve helped me through a lot of difficult times.

We have also been able to give authors and publishers in New Zealand an avenue to easily share some wonderful local work with the public. In Auckland, we’ve been able to work with organisations on a book fairy pop-up library. Now we have a Little Free Library full of Book Fairy books in Britomart (yes, that’s the same place where I did my very first book drop a year ago).

For me, the most important aspect of being a Book Fairy is being able to share my passion with my daughter. My little girl was only 5 years old when she started book fairying with me. She proudly tells everyone that’s what I do.

The first moment when I realised that I wanted to be a book fairy may not have been anything grand, but believe me, everything that happened after that has been just magical.

You can find out more about what The Book Fairies in New Zealand here:

Has Jade’s story made you want to become a book fairy and spread some magic? Why not start with a little bundle of stickers… then maybe a tote bag… perhaps some badges… or a bookmark? FREE DELIVERY WORLDWIDE!