As the book fairies turn the grand old age of 1, we have invited people from all over the world to share their stories about being a book fairy. Today we’ve asked Manme from Madrid, Spain!

The story of Manme in Spain 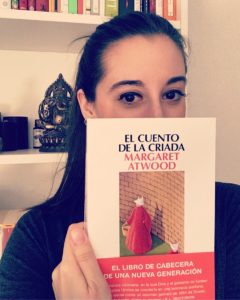 Have you ever stopped to think about what are you doing for others? Smile to the waiter who serves you a coffee, give up your seat on the subway… well, I wanted to do something more.

One day I found in a newspaper a photo of Emma Watson hiding feminist books on the London Underground. At that moment I thought that it was a brilliant idea, to be able to share books with such important messages with people in the same city.

After a few days, I discovered that Emma was hiding books with The Book Fairies. I remember looking for The Book Fairies and it seemed like a fantastic project. I have to admit that I was almost a week thinking about ordering my stickers (or not doing it at all). At first I thought they were crazy (leave books on the street for a stranger to find them?), but the truth is, that it’s the crazy people who dare to change the world.

Step by step I’ve been getting more and more involved with The Book Fairies, and I’m so happy to do so. I am aware of the challenge of bringing this movement to Spain, but I’m also very excited that writers want to hide their books to reach people; I’m happy because a child, when they see our tote bag, they ask: “Are you going to hide a book today?”; I get emotional when someone writes to me to say that I have improved their day. That’s what it’s all about, with a small gesture, to make someone happy and share our passion for books.

The Book Fairies, with our particular magic, make many people happy.

“Books taught me to think, and the thought made me free”– Ricardo León.

You can find Manme on:

A massive Happy Birthday to every book fairy this March! If you want to get involved, head to this page to find your first goodies 🙂 (Warning: book-fairy-ing has been known to be addictive). Read more book fairy stories here.