We love to encourage book fairies to review books on social media and here! Ashley in Montana has been reading The Ascension of Melanie Winters and here is what he thinks!

A Book Review: The Ascension of Melanie Winters 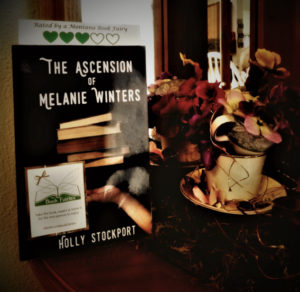 I received a copy of “The Ascension of Melanie Winters” from the author, Holly Stockport to read, review, and book fairy. Here is my review of the book for the book fairy website (I will be dropping the book this coming week, hopefully Monday if I have the time):

Holly Stockport has created an incredibly entertaining story of a telekinetic college student struggling with classes as well as the image she has conjured of herself which she wishes to become in “The Ascension of Melanie Winters.” Things quickly spiral out of control and everything Melanie knew of her life changes in this fast-paced debut book. I loved immersing myself in Melanie’s life and watching the events unfold, but did not connect with the characters on the level I would have liked due to an overabundance of telling language and handful of showing language in the narrative. This might also have been attributed to by the fast pace of the story.

The book opens with the definition of “ascension.” This really gave the title meaning to me, as the reader, and it drew me in to what might unfold in the story. The opening line was also an excellent choice: “She hadn’t meant to pull apart a building.” Gives a clear picture in the reader’s mind as well as being an excellent point of foreshadowing, but I won’t go into that for fear of spoiling. This turning out to only be a dream was an excellent way to portray Melanie’s current standing with her powers as well as where she wants to be with them. The rest of the introduction is a bit lacking. Most of the writing was telling language with very little showing language and a lot of redundancy. “She looked over at her note books and folders, which were sprawled on the floor from the previous night’s studying.” This was a missed opportunity to describe Melanie’s living quarters and how she keeps them, which would help to make Melanie more real as a character as well as tell us a bit about her. This description could then lead into the books sprawled on the floor from the previous night’s studying. Melanie’s movements through the flat as she made her way to the campus were pretty typical of a college student, but the characters introduced and interactions with them seemed a bit forced in places and unnecessary for the progression of the story. I wasn’t able to get a clear idea of Melanie’s relationship with the characters beyond the stated – this character is a flatmate, this character had an awkward encounter with Melanie the night before and regrets it, etc. This made it hard to place Melanie’s social standing in the college and made her eventual leaving of the school harder to sympathize with. I didn’t feel she was losing any real connections, nor did I feel she had really been betrayed by anyone by the harsh comments circulating the internet after the incident because it hadn’t seemed she had had any real ties to anyone there.

There is a scene early on, when the afore mentioned awkward moment with one of the characters in the introduction, Charlie, and Melanie is finally revealed. Quite shockingly, but not unrealistic at a college, it turns out that Charlie nearly rapes Melanie in a drunken stupor. While this event isn’t unheard of at colleges, the way it is portrayed is rather lackluster. Everything from the description of the events to Melanie’s feelings on the event are portrayed with solely telling language. This gives a disconnect with the reader, makes it hard for the events to feel real, leaving the reader with no emotional response to Charlie, Melanie, or the event. This type of scene should incite emotions in the reader. We should feel for Melanie, we should be lead to some sort of emotional response to Charlie – whether that be anger or otherwise is up to Stockport and how she wants to portray Charlie’s actions, but we should have empathy with Melanie and her wanting to avoid Charlie all morning. There are several opportunities for improving the description of this even present in how Stockport chose to present the event. As it was written, I never got a clear sense of how or why it was even included in the story. The only rationale I can come up with is to try and give bigger meaning to why Melanie intervenes in the event that ultimately leads to her dropping out of college, which I don’t think is entirely necessary as there are other parts of the narrative that successfully do this.

As more characters are introduced and Melanie creates relationships with these characters, I feel the building of the bonds between Melanie and the characters is skimmed over too much, making the level of trust between the characters seem a bit ridiculous and the passing of time hard to fully grasp. As a reader, I would like to see and experience these bonds being built to fully understand the connection the characters make with each other. This would also help round out the characters, give them more life, and make them more relatable.

I loved reading this book and would recommend it to others as a great story and quick read. Stockport excellently put together a sequence of events to first grab the reader’s attention, pull them along on this rollercoaster ride of events as things seem to calm down only to get spun around again, and ending with an amazing cliff-hanger leaving the readers wanting more. Questions rise and questions are answered, leaving just the right amount and the right questions hanging over the reader’s head to anticipate more and eagerly await more books to come. The execution – the writing – of this story could use improvement, and I hope to see that improvement in future works. There were some contradictory phrasing, redundancies, and overuse of words, namely “suddenly” and “immediately.” There were occasions reading the book that I felt Stockport thought me (the reader) an idiot that needs things said several times within a few sentences. There was an overuse of “he said/she said” in dialogue between two or a few characters. I’ve already mentioned the overabundance of telling language vs. showing language. These are areas that I would love to see improvement in future works. Stockport has a talent for creating a story, now she just needs to hone her tools. She has the basics. There were several instances in the book that had great showing language, great transitions, the right amount of explanations and descriptions to give the reader the information they need and keep the story moving. I would like to see more of this throughout the entire work.

And so, I would like to end this review with an excerpt – an example of great writing from this book that I think (and hope) does not spoil anything for those who have not yet read the piece:

A voice. A familiar voice. The voice of a woman he loved to hate and hated to love.

There it was again. But he couldn’t see her. Everything was black. Nothing made sense.

Solomon. His name sounded so sweet and sour on her tongue. He opened his eyes and found himself in his private science facility. Lying in the bed that supported his every fibre of being, he looked up at the ceiling and then caught the eye of his assistant. Doe eyes, raven hair, and skin white like alabaster. If he didn’t know any better, she could have been Snow White. But he knew that her own personality was ripped straight from the Evil Queen.”

We hope you enjoyed Ashley’s review! If you’d like to send us one and be featured here, please email a pic and your review to bookfairyemail at gmail.com 🙂

One thought on “Book Fairy Review: The Ascension of Melanie Winters”