You may or may not know that book fairies love running a project called ‘Book Fairy for a Day‘, which encourages authors to hide their OWN books around their home town. Here are some examples from Singapore!

At the beginning of May this year Sharlene Teo was on book tour to introduce her debut novel called Ponti. She took time to hide a few copies with us around town. Her novel is set in her hometown and has been shortlisted for Hearsts’ Big Book Award 2018. 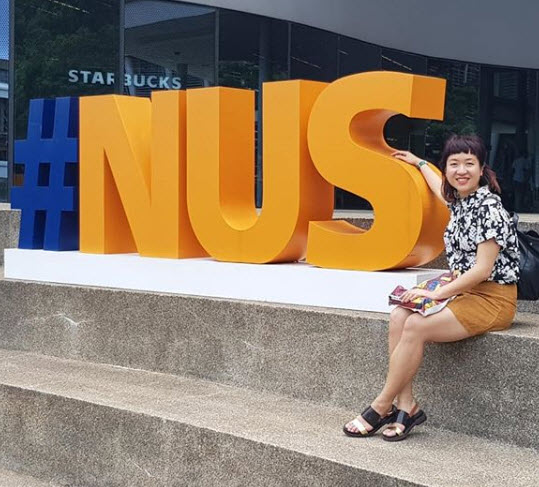 Friendless and fatherless, sixteen-year-old Szu lives in the shadow of her mother Amisa, once a beautiful actress and now a hack medium performing seances with her sister in a rusty house. When Szu meets the privileged, acid-tongued Circe, they develop an intense friendship which offers Szu an escape from her mother’s alarming solitariness, and Circe a step closer to the fascinating, unknowable Amisa.

Seventeen years later, Circe is struggling through a divorce in fraught and ever-changing Singapore when a project comes up at work: a remake of the cult seventies horror film series `Ponti’, the very project that defined Amisa’s short-lived film career. Suddenly Circe is knocked off balance: by memories of the two women she once knew, by guilt, and by a past that threatens her conscience . . .

Told from the perspectives of all three women, Ponti by Sharlene Teo is an exquisite story of friendship and memory spanning decades. Infused with mythology and modernity, with the rich sticky heat of Singapore, it is at once an astounding portrayal of the gaping loneliness of teenage-hood, and a vivid exploration of how tragedy can make monsters of us.

A few weeks later, mid June, we got together with Ovidia Yu, a writer, who has published award-winning plays and short stories. She has won several awards and had more than thirty of her plays produced. Ovidia is considered one of the most well-known writers in Singapore. Her Aunty Lee series as well as the Tree Mystery series are both set in Singapore. 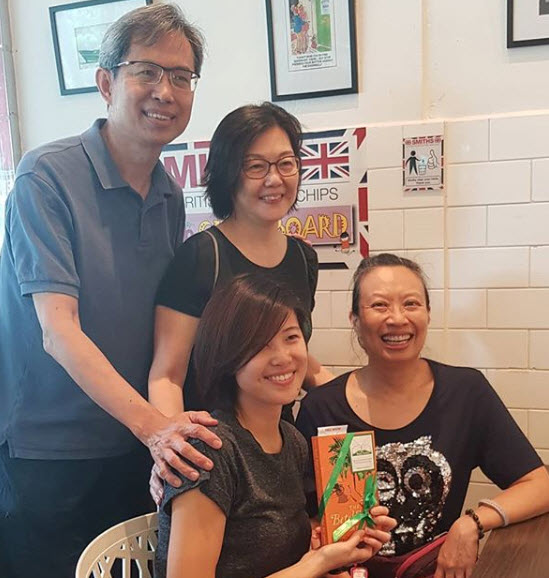 The Betel Nut Tree Mystery is the second novel in Ovidia Yu’s delightfully charming crime series set in 1930s Singapore, featuring amateur sleuth Su Lin. Singapore is agog with the news of King Edward VIII’s abdication to marry American heiress Wallis Simpson. Chen Su Lin, now Chief Inspector Le Froy’s secretarial assistant in Singapore’s newly formed detective unit, still dreams of becoming a journalist and hopes to cover the story when the Hon Victor Glossop announces he is marrying an American widow of his own, Mrs Nicole Covington, in the Colony.
But things go horribly wrong when Victor Glossop is found dead, his body covered in bizarre symbols and soaked in betel nut juice. The beautiful, highly-strung Nicole claims it’s her fault he’s dead . . . just like the others. And when investigations into her past reveal a dead lover, as well as a husband, the case against her appears to be stacking up. Begrudgingly on Le Froy’s part, Su Lin agrees to chaperon Nicole at the Farquhar Hotel, intending to get the truth out of her somehow. But as she uncovers secrets and further deaths occur, Su Lin realises she may not be able to save Nicole’s life – or even her own.

Also in June, Judith Huang was our #bookfairyforaday!

Judith has been out and about hiding books – her first novel is a finalist for the 2017 Epigram Books Fiction Prize and below is the synopsis.

Judith went to her old school, and also out and about to find great locations to hide the book. And look – an ‘i believe in book fairies’ tote bag, too!

Judith really enjoyed being a book fairy for a day.

Sofia is an ordinary schoolgirl living in a future Singapore where the population is divided into three social strata. When she inadvertently unlocks the gateway to a new world, she realises she must escape the government’s radar. She ventures into the lowest rung of society, the Voids, and meets with the eccentric Uncle Kirk and the resourceful Father Lang. While on the run, she learns why her father disappeared seven years ago and why the new world exists in the first place. Probing and thrilling, this novel explores worlds within worlds and reinvents the creation myth.

In the video (shot by the Singaporean book fairy kathleenchere.com/video) Judith explains how she found a book, hidden by a fairy in her favourite neighborhood coffee shop and how she then decided to meet us and have us help her spread the word about her debut YA novel.

Last but not least we hid another debut novel on August 21 st , together with Rachel Heng. Her first book is called Suicide Club. 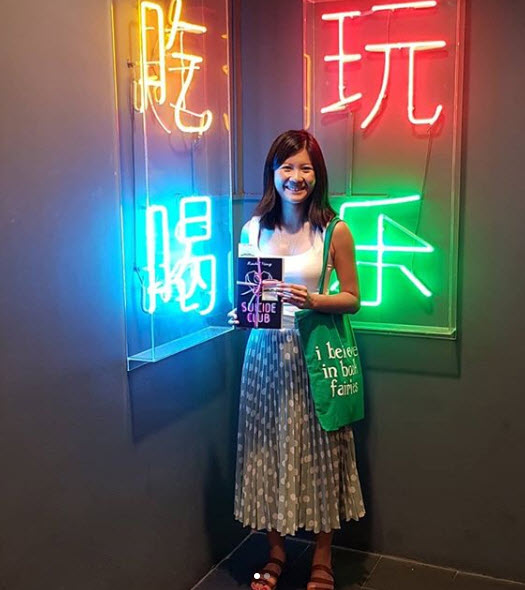 Rachel in a retro gaming arcade on Clarke Quay.

In this novel, set in near future New York City―where lives last three hundred years and the pursuit of immortality is all-consuming―Lea must choose between her estranged father and her chance to live forever.

Lea Kirino is a “Lifer,” which means that a roll of the genetic dice has given her the potential to live forever―if she does everything right. And Lea is an overachiever. She’s a successful trader on the New York exchange―where instead of stocks, human organs are now bought and sold―she has a beautiful apartment, and a fiancé who rivals her in genetic perfection. And with the right balance of HealthTech™, rigorous juicing, and low-impact exercise, she might never die.

But Lea’s perfect life is turned upside down when she spots her estranged father on a crowded sidewalk. His return marks the beginning of her downfall as she is drawn into his mysterious world of the Suicide Club, a network of powerful individuals and rebels who reject society’s pursuit of immortality, and instead choose to live―and die―on their own terms. In this future world, death is not only taboo; it’s also highly illegal. Soon Lea is forced to choose between a sanitized immortal existence and a short, bittersweet time with a man she has never really known, but who is the only family she has left in the world.

Just email bookfairyemail@gmail.com with details about your book, and where you are based. We love to receive donations from authors, including independent authors, to hide in our special book fairy way. If you’d like to join us for an afternoon and hide your own book, even better! We look forward to hearing from you. You can click here to see other ‘Book Fairy for a Day’ posts.

Want to become a book fairy?

It’s easy! Just head to our little shop to grab some stickers and goodies, then while you wait for the post to arrive you can gather some books you’d like to hide! Then tell us on social media when you have received your package!