Book fairies in Vancouver, British Columbia, hid some books with the author herself, while many other copies of Here I Am! were hidden around Canada and the states!

Some book fairies in Canada and the US were excited to prepare copies of the fantastic Here I Am! by Pauline Holdstock ready to hide on February 19th.

Where were the books hidden?

Book fairies in from Vancouver to West Virginia hid copies of Here I Am! in order for some lucky finders to stumble upon a new read! The states involved were New York, Massachusetts, West Virginia, Pennsylvania, Wyoming, Michigan, Connecticut and Idaho!

The Canadian provinces involved were British Columbia, Saskatchewan, Ontario and Manitoba! Our ‘Book Fairy For A Day’ activity with author Pauline Holdstock was in Victoria, BC.

Author Pauline Holdstock becomes a Book Fairy for a Day!

There is little book fairies enjoy more than meeting with authors and getting them involved in hiding their own books! Pauline thoroughly enjoyed being a book fairy for the day with her book, and hid copies all around Victoria!

MyMum said sometimes refugees don’t eat anything for days and days. Sometimes weeks and months so I am really lucky. I think she exaggerates. But I think she is right about the lucky bit. Or maybe not. Sometimes I forget that MyMum is dead. But that is probably better than remembering.

When Frankie’s mother dies, he tells his teacher, of course. But he can’t seem to get anyone at his school in southern England to listen to him. So the six-year-old comes up with a plan: go to France, find a police station, and ask the officers to ring his father. Thus a stowaway’s view of the sea opens Giller-nominated Pauline Holdstock’s eighth novel, narrated in turns by Frankie—who likes cheese, numbers, the sea when it’s pink and “smooth like counting,” and being alone when he feels bad—and a cast of characters that includes his worried Gran, his callous teacher, and his not-so-reliable father. Set in the summer of Annichka the Soviet space dog, Here I Am! is a mesmerizing story about the lucidity of children and the shortsightedness of adults.

Were you lucky enough to find a book?

Many authors have become Book Fairy for a Day!

Pauline Holdstock isn’t the only one! You can click here to read more stories about authors getting involved.

We are worldwide and are always looking for new fairies to hide books! When you’re ready, grab your first set of stickers. Every single order comes with a little guide to help you get started. 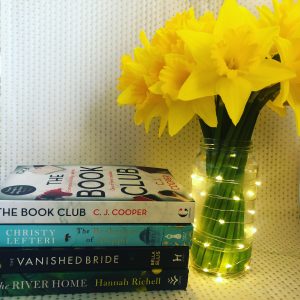