Emma Watson’s latest choice for her Our Shared Shelf feminist book club is Margaret Atwood’s The Handmaid’s Tale. A TV adaptation of the novel is currently airing in the UK on Channel 4 and in the US through Hulu. In fact, Hulu have given us 10 copies signed by the author herself to give away! This competition is worldwide 🙂

About the book & Our Shared Shelf:

This piece of dystopian fiction is told in the first person by a woman called Offred (literally Of-Fred). The character is one of a class of women kept for reproductive purposes and known as “handmaids” by the ruling class in an era of declining births due to sterility from pollution and sexually transmitted diseases. Our Shared Shelf is Emma Watson’s feminist book club, started in early 2016 with the aim to bring more literature about equality to the forefront. 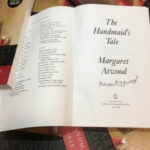 We have ten copies of The Handmaid’s Tale to give away, signed by the author Margaret Atwood herself!

This is the English version of the novel, which has now been made into a TV series with rave reviews.

Thanks to Hulu for giving us the signed copies! 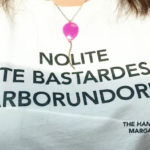 There are five runners up prizes too, a t-shirt quoting “nolite te bastardes carborundorum”, a phrase from the book.

This is a great runners up prize! Thank you to Vintage for the t shirts.